Gerald C. (Jerry) Gannod has always had an interest in computers.

“My first computer was a Timex Sinclair. It didn’t have a keyboard,” said Gannod. “It was like a glorified calculator. That was the first one. The next one was a Texas Instruments TI-99a.” 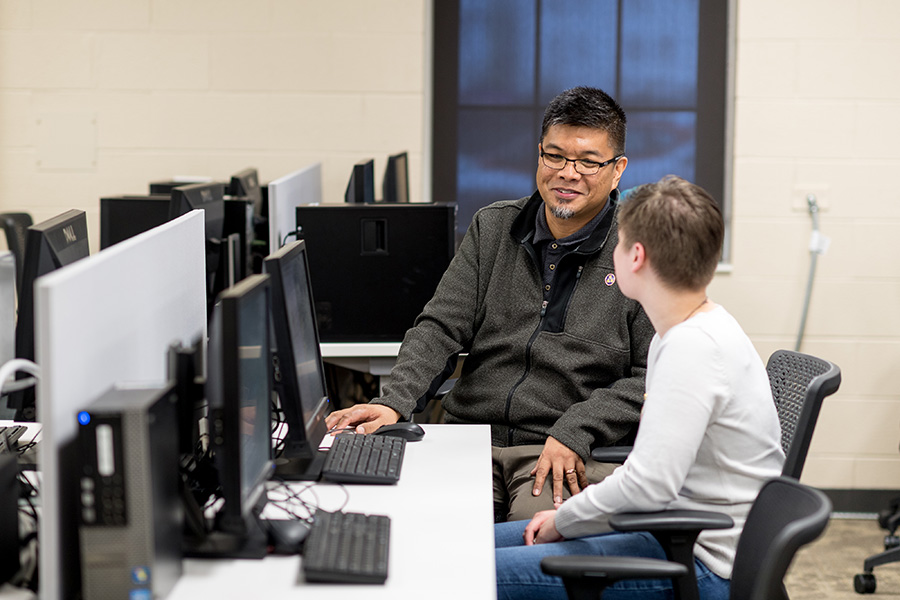 From the more primitive Apple IIe computer he used at Plymouth-Canton High School in Michigan in the mid 1980s to the most recent state-of-the-art Apple MacBook Pro at Tennessee Tech, the professor and chair of Tech’s computer science department has enjoyed computers.

“There was a movie that came out around 1983, ‘War Games.’ It really started to expose this idea to everyone to use computers to do things like create games and artificial intelligence,” said Gannod. “I also had an aptitude for computers. I enjoyed getting into a problem and trying to solve it.”

One of five children, Gannod was the first of his siblings to be born in the United States after his parents moved to Michigan from the Philippines. Besides computers, his interests also included music and writing.

“I really enjoyed writing. I thought about going to college to major in English and be a writer,” Gannod explained. “My sister’s in-laws were teachers and they taught math and English. They both said there was going to be a lot of jobs and opportunities in computers. So I went with computers.

Gannod has come a long way since computers first piqued his interest. After graduating from Plymouth-Canton in 1986, he attended Michigan State University where he earned his bachelor’s and master’s degrees – and his doctorate. After leaving MSU, Gannod gained some industrial experience with the Suncorp Group, Unisys Corporation and IBM. Prior to joining Tennessee Tech, Gannod was a professor at Miami University and an assistant professor at Arizona State University.

While at MSU, Gannod met his wife, Barbara, in the Ph.D. program. Together they started a family which has grown to five children — Mateo (18), Eddie (16), Trejan (13), Asher (11) and Tia (9). Mateo is a freshman at Tech, majoring in computer science while Eddie, Trejan, Asher and Tia attend Highland Rim Academy where Barbara is a teacher.

Looking for a good place to raise his family is one of the big reasons why Gannod came to Cookeville and Tennessee Tech.

“It had to be the right institution where my kids were going to get a good education,” said Gannod. “Tennessee Tech fit the bill. It didn’t hurt that this was a great place to live.”

Gannod was familiar with Tech and the region because he and his family would camp on Dale Hollow Lake every summer. When the department chair position became available at Tech, Gannod knew it was the right place for him and his family.

“I came to Tennessee Tech for the chairs position. There are certain talents that I bring that can be a benefit to faculty and staff and students,” Gannod said. “Sometimes motivations can be selfish. My motivations come from somewhere else. It’s about wanting the students to succeed.”

Gannod has seen the computer science department grow and succeed in the two short years he has been the chair.

“There has been a lot of growth not just in students, but in opportunities, too,” Gannod continued. “Companies come to this town because they want our graduates. We have seen an increase in scholarships from corporate partners. I believe that is just the start of it.”

Job opportunities continue to grow in the field of computer science. Gannod believes that students at Tech are going to be in line to fill those jobs with the vital education and experience they get in the computer science program.

“Companies are saying Tennessee Tech is one of the best places to hire computer science talent,” Gannod explained. “There is a history here of community and paying close, personal attention to our students. We make them work hard but they recognize that the faculty are there for the students and to help develop them and become successful in the workforce or in research. We care about the full well-being of the students.”

What he enjoys most, however, is working at a university and living in a community that is just right for him and his family.

“It’s a little bit of being in the right place at the right time,” said Gannod. “It’s a great place to live. It’s a great institution and we get some of the best students in the state.”