When Richard Pirkle explains how white blood cells get from the bloodstream to an injury, he doesn’t use diagrams and PowerPoint. Instead, he uses hand puppets, silly voices and his body, which he flings around the room, to explain the journey. 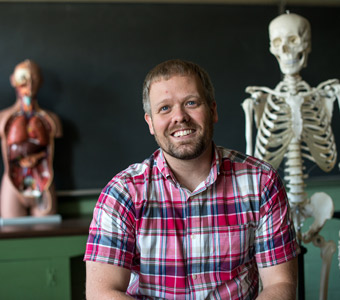 “I do voices for things, and at some point, my hands will be in the air and I’ll do puppets,” the biology instructor said. “I have jokes planned into the presentations. There’s no reason not to. I treat my classes like a standup routine.

“Every time I do something silly, they like it better. The more you make yourself look like a regular person and not the stodgy professor they see in movies, the more you can get them to engage.”

Silly voices and jokes are just part of Pirkle’s arsenal of teaching methods for his anatomy and physiology classes.

Twitter is one of his signature tools, because students use it more than Facebook and no one asks questions in a 250-person lecture hall. His feed includes updates about his coffee intake, but mostly it is conversations with his current and former students: advice, encouragement and, of course, more jokes.

“They’re going to tweet their feelings at that moment; it’s word vomit. So if someone says, ‘If I study A&P for one more hour I’m going to go crazy,’ I can say, ‘Take a break, go get a donut. Bring me one.’ I’ve actually gotten donuts that way,” he said. “It’s a good way to be a positive influence in their lives.

“They think there’s supposed to be this wall between them and their professors. I think it’s better to break down that wall. I think a lot of times I get better work out of them because they know I’m trying to help them.”