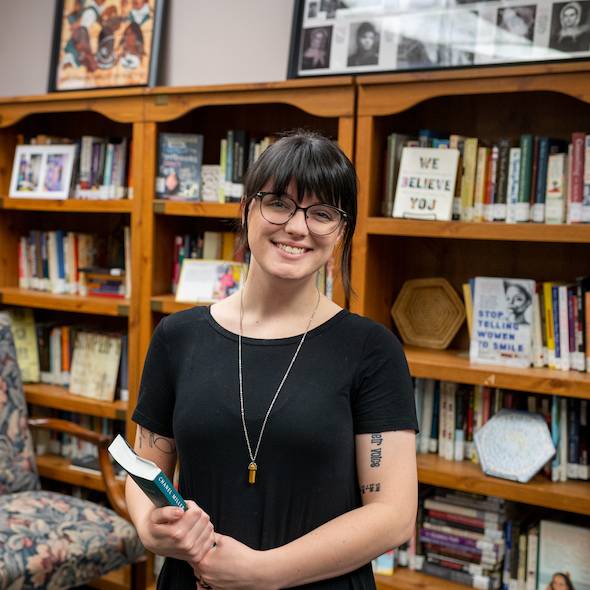 Madison Sendek, '22, is a psychology major with a minor in human ecology, criminal justice, and social sciences.  She is from Whitwell, Tennessee, right outside of Chattanooga. It's a small rural community of 1,500 people and two stop lights.

As she enters her senior year at Tennessee Tech, Sendek will be working as an intern with the Upper Cumberland Human Resources Agency in a program that provides advocates in the court for kids in foster care. It's an opportunity that combines her studies at Tech and her passion for being an advocate. It's also an opportunity she might have passed up a few semesters ago, until she met people on campus who helped bring her out of her shell.

“I would like to work in a small school district, so I can work closely with kids, families, and teachers to help kids get the resources they need to succeed. A career in advocacy is a dream of mine.”

After getting her undergrad degree, she plans on getting her master’s in school psychology.

Sendek is the oldest of six children, no two of them having the same set of parents.

“My home life definitely influenced me from a young age because I did not know who my real dad was for a long time, then my mom and my dad who raised me got  divorced when I was 12.”

Sendek believes mental health is something a lot of college students struggle with. She was diagnosed with Bipolar Disorder shortly before moving for college, and it proved to be a challenge. She counts herself lucky to have found people that she needs in her life to support her and keep her going. She feels strongly that those people exist for everyone.

“After seeking treatment and going to therapy and finding out what works for me, I feel like I have really  taken the reins on that diagnosis and used it to my benefit, and it has made me a better advocate for people around me and more understanding of what people are going through.”

Sendek said her time at Tech has been a really positive experience.

“My time here at Tech has influenced me to get out and seek leadership opportunities.”

She became close with a lot of faculty members that she credits with shaping her into the person she is today: a person who pushes herself to learn more, work harder, and put herself out there to chase different opportunities.

“I was lucky enough to meet people who pushed me.”

She credits those people with her being president of Peer Empowerment Program (PEP) at Tech.

Sendek said last year, she wasn't her best and might have put herself down, but today she is proud of how hard she has worked the last 3 years to pursue her goals. She went from being a wallflower to diving headfirst into leadership opportunities and experiences that she would have been too afraid to seek out in the past.

“I feel like I am the best person I can be given what I was handed.  Until now, I haven’t given myself enough credit for taking everything I have been through and making that a valuable experience instead of something bad that happened to me.”

If she could change one thing in the world today,  it would be the hearts of people who are so quick to judge. She feels that no one has ever gone through life without struggles.  She believes that if everyone took the time to let that soak in, we would be a little more kind to each other. Not only that, but she says we all have the chance to be a friend to someone.

“I would have people open their eyes a little more to the people around them and try to remember to be kind or empathic and considerate to other people.”

Sendek  said she is blessed to have been raised in Tennessee, but she would like to move somewhere different to experience that and see the world.

She's also open to the idea of returning to a small town much like the one where she grew up, taking what she's learned and improving resources as an advocate for kids like her.

Sendek enjoys true-crime stories and loves to listen to true-crime podcasts. She was married in October 2020.